The well known Benelux science and technology publisher, EOS, features an interview with one of Mindspeller's BCI experts, Bob van Dyck, in their September journal.

Here's the link to the original article (in Dutch):

Below, please find a deepl.com translation of the article to English:

"Will we be chatting through our thoughts soon? 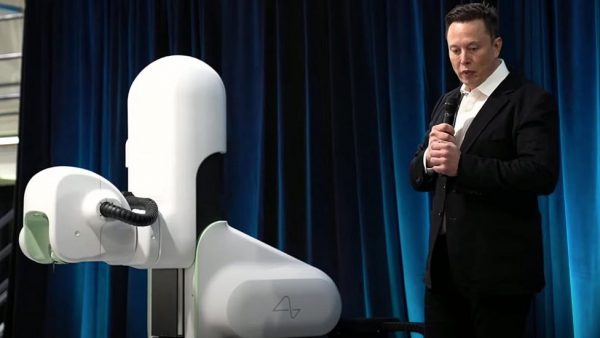 Both Elon Musk and Mark Zuckerberg are investing heavily in technologies that are connected to our brains. How far have they got? And how should we deal with the interest of large tech companies in our deepest thoughts?

Elon Musk, visionary and co-owner of Tesla and SpaceX, among others, has succeeded in inserting an implant that could eventually 'read thoughts' into a pig's brain. This implant is wirelessly connected to a computer that has to decipher the signals in the next step. After this success, Musk is one step closer to his ambitious plan to eventually also provide people with such a brain implant. Facebook also has a research department that deals with connecting our brain to a computer. Nothing was yours except the few cubic centimeters inside your skull', George Orwell once wrote in his famous book '1984'. But do these cubic centimeters remain ours? How sci-fi are the plans of Musk and Facebook with our brain?

Biggest plans Elon Musk has in store for the human brain with his startup Neuralink. In this way he hopes that his brain implant will allow us to communicate with each other by thinking in the future. His technology would also be able to store thoughts and memories so that we can 'relive' them later on. And yes, Musk admits that this scenario is suspiciously similar to the plot of a Black Mirror episode. This Netflix series is good at predicting things', he joked a few weeks ago during his demonstration of Neuralink's latest developments. In addition, his technology could reverse conditions such as blindness, deafness and even paralysis.

Gertrude and the fight against artificial intelligence
Musk warns of the imminent threat of artificial intelligence. In order to arm ourselves against this, we need brain implants that make humanity smarter and better, according to Musk. According to him, within barely five years we would become more intelligent than humans. Things are going to become unstable and strange,' he explained in an interview with the New York Times earlier this year. A few years earlier, he warned that if we're not careful, people are at risk of being treated 'like pets' by AI in the long run. More AI, rather than less, to cope with the increasingly smarter AI.

During his presentation Musk presented three pigs. Especially the pig named Gertude stole the show, because she carried a first version of this Neuralink technology in her brain. Like a kind of fitbit under the skull', Musk described the device as being the size of a coin. The device recorded Gertrude's brain activity and then sent the output wirelessly to a screen. Every time Gertrude bumped into something with her snout, the part of her brain responsible for food became active, and Musk and his audience heard a beep.

Neuroscience Theatre
Revolutionary according to Musk, but not everyone shares this enthusiasm. The magazine MIT Technologyreview shortlisted the demonstration as 'neuroscience theater'. Even closer to home, Musk didn't make the impression he hoped for. What he shows with pig Gertrude is that his hardware works, which is already quite a lot,' says Bob Van Dyck, an employee at Mindspeller, a spin-off from the KU Leuven lab of computational neuroscience. But he doesn't yet have software to decode the signals from her brain. In addition, he showed that his team was able to place and remove the implants safely in the brain. The little pigs seemed happy and healthy', Van Dyck laughs. But in itself the technology is not very special. It already exists in other forms today'.

In the US, for example, where more flexible regulations make it easier to carry out such a far-reaching experiment on people, a project called Braingate is running. Under the motto 'Turning thoughts into action', this group of researchers ensured that crippled people could move a robotic arm through their thoughts. In Belgium, researchers from KU Leuven have been making paralyzed patients communicate again for years by allowing them to focus on a certain letter on a screen. American scientists have even succeeded in projecting images from our brains onto a computer. You can see the result in the video below.

Musk is known as someone who likes to make great promises,' says Katleen Gabriels, moral philosopher at Maastricht University with a specialization in computer ethics. Still, he doesn't always succeed in keeping these promises, just think of the crises Tesla had to deal with. He actually wanted to start testing his implant on people this year. That deadline seems difficult to meet.

Not an obvious case to decode the brain.
Before Musk can bring its technology to the market, there are still some problems. The brain activity that makes us think is scattered all over our heads. If Musk really wants to read our thoughts, he will have to place electrodes all over our brain,' says Van Dyck. That is certainly not obvious. After all, our brains are 'plastic', which means that the brain is constantly making new connections, learning and therefore literally changing. So the big question is: who says that if you place an electrode in the right area of the brain, it will retain that same function?

The idea of Musk seems far-fetched when you know that our body does not like intruders, not even in our brains. In order to cause as little scar tissue in the brain as possible, Musk and his team developed a flexible 'wire' that is many times thinner than human hair. This wire connects the thousands of electrodes on the chip and can carry a lot of data. The wires are equipped with a biocompatible polymer jacket, which should further reduce scar tissue. Scar tissue in the brain is problematic because it forms an obstacle between the brain signals and the chip's electrodes. After a while, the electrodes will be completely encapsulated and the chip will no longer work,'' Van Dyck continues. With his chip Musk hopes to postpone this process for decades.

The operation needed to place the chip is not without danger. Every operation in which surgeons open the skull involves a risk of, for example, cerebral haemorrhage or meningitis. The solution Musk and his team came up with is a surgical robot. The robot can then, much more precisely than a human surgeon, place the chip under the skull and thus minimize the risk of cerebral hemorrhage. Van Dyck calls this robot 'a technical feat'. Musk hopes that the robot will reassure people and persuade them to undergo this 'minimal' procedure. Still, the operation is difficult to justify for someone who doesn't need it medically,' Van Dyck emphasizes.

Facebook also sees the brain as an investment
Not only Elon Musk shows interest in brain science. Facebook is also investing heavily in these kinds of technologies. Mark Chevillet, the director of brain-computer interface research at Facebook Reality Labs, told the New York Times that their future technology could decode simple commands such as 'home', 'select' or 'delete' from our brain. The large tech company plans to look into our brain through a helmet with infrared light, which would make an operation superfluous.

Is the attention of Big Tech a good thing?
Opinions are divided as to whether we should be happy with the interest of Big Tech in our brain. Bob Van Dyck already thinks so. The more attention, the better. The fact that players such as Elon Musk and Mark Zuckerberg, CEO of Facebook, are also showing commercial interest means that more money may be freed up for research in the future,' says Van Dyck. Katleen Gabriels still has her doubts: 'It is important to distinguish between technology that treats and technology that improves. Technologies that treat, such as the technology that allows paralyzed patients to communicate again via the computer, deserve all the world's attention. Technologies that improve our human species, such as Neuralink and Facebook, should be welcomed with the necessary skepticism'.

There is also another security issue at stake. Nobody wants to give hackers access to their heads, of course. When you implant a technology in the body, you inherit the weaknesses of the technology,' says Van Dyck, 'It's not like you can take it off for a while. Gabriels picks up on that: 'No computer technology is safe from hacking. Cyber security specialists agree: there's no such thing as one hundred percent security'. So far there has been no solution to this - yet important - snag.

The Future
Will we soon be able to operate our smartphone with our thoughts? Will it be possible to communicate directly between brains? A lot of questions remain. It's going to take some time anyway before we will be able to place brain implants in the brains of healthy people to 'read minds', Van Dyck assures us. First we have to fine-tune current technology for people who really need it, such as people who are paralyzed. Now that technology is far too tiring for patients. That needs to be improved'.

To the question of whether both experts would be happy to have their own brain implants in the future, they both answer that they would not. I personally don't want a hole in my head to put electrodes on my brain anyway, and I'm already someone who is excessively interested in this technology', Van Dyck laughs. Gabriels isn't entirely convinced either: 'I don't experience any difficulties in my life right now because I still have to type a text or because I have to control my smartphone with my fingers. But to a better memory, for instance, I might not say no'. She adds: 'As long as it can all be done safely of course'.